This is likely to be a very grognard unfriendly idea, but I love seeing firearms in fantasy settings. Sure, they don’t work in all settings, but when they are balanced with the rest of the combat system and don’t break the verisimilitude of the setting, they are incredibly awesome and create many fun scenarios. Here are five thoughts to spark some discussion and make you consider adding firearms to your game.

Having firearms in a fantasy setting can make more character types and options available for players. Including them opens up the idea that some mechanical advancement is possible, so in essence they expand the world. But even merely saying that some very advanced blacksmiths create rare weapons that use powder to propel small slugs of metal creates many more options for 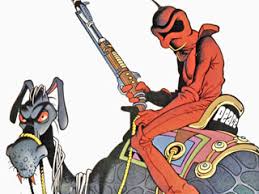 These combinations or additions may appear odd within the context of a traditional fantasy game, but a few tweaks to the world setting opens up many options and can include fun elements of storytelling usually only found in other genres.

I’m going to refute this with my next point, but anytime I’ve seen guns included in a fantasy setting, be it in a video game, story, comic, or RPG, they are infinitely more awesome than guns are in real life. Guns in a setting that is 30% different from reality evolve in a different way and gain all of the embellishments and extraneous, but nifty looking, bits that other elements in that setting do. Whether it is the arcane look to them, the steampunk attention to detail, or the large bulky size to incorporate the bigger mechanics, guns always look a bit more awesome when they are in fantasy settings. The essence of embellishment just clings to fantasy settings and becomes more elaborate when it comes to mechanics.Check it out:

And a quick google image search for steampunk gun turns up a bunch of very fun looking real-life creations in the same vein. The big, bulky, or very intricate gun is just something we associate with fantasy settings that have guns.

3. Historically, Firearms Were More Present Than We Realize, So Why Not In Fantasy Ones?

When we think of firearms in history, the wild west springs to mind at the top of the results, and while advanced and dependable firearms are not that ancient of a concept, humans (at least in china) have been using powder propelled bullets since somewhere in the 1100s. That gives us a good 900 years or so of history with a gun-like weapon. In a fantasy world, how could races who are stereotypically good with metal and mechanics have missed some kind of powder weapons? According to wikipedia, the earliest cannon  was around 1288 and the earliest handled projectile shooting device was about a hundred years before that. By 1364 the first modern firearm was used, and by 1380 they were known across Europe.

So, if primitive guns were in use in at least some fashion as far as ~650 years back, why wouldn’t that occur in a fantasy setting? Would the prevalence of magic prevent it, or would a gun provide a quick retort to a fireball? Everyone’s setting is different, and firearms, even rare ones, might not fit into somebody’s world, but we have historical proof of them a fair ways back into what we would consider the real life settings for many fantasy campaigns. Besides which, even without the steampunky incredible elements, real life antique guns just look awesome and classy (For, y’know, things capable of ending a human life).

4. It Is Very Fun To Arm Enemies With Them

One of the most common arguments I hear against including firearms into a fantasy setting is that they give the PCs too much power. To this, I always respond: “Well why don’t the NPCs have them as well, then?” Firearms can be very deadly if left unbalanced in a game system, but a major balancing factor would be to give them to the enemies the PCs face as well. Let the PCs face off against a group of kobolds wielding stolen six-guns, or a group of Orcs outfitted with crude flintlocks. Who would mess with the palace guard carrying fantasy style rifles or armed with large, bulky, Dwarven pistols.

Having firearms on the other side of the screen can be a really fun element. It could change the way that warfare is handled. It could be the thing that empowers the Orcish army and be a main plot point for the PC’s quest. Handguns and rifles could be in the hands of a very skilled lieutenant of the BBEG, ala Basher Moran, making her a match for the PCs who currently lack such weapons.

5. Balance Can Be Achieved More Easily Than You Think

The one thing I’ve saved until last is talking about how guns would be balanced in a fantasy world. The common conception (or misconception) is that guns would overbalance things greatly. In reality, guns were a definite advantage against those without them, but the inclusion of guns into a fictional game setting can be tweaked in various ways to make them balanced.

I’ll fully admit that firearms in a fantasy setting might not be everyone’s cup of tea. But if your setting is more fantasy and less realism, or you can see areas where they would make a fun fit, consider trying them out. Model them off of ranged weapons like bows and arrows for balance, just give them the firearms coating of fluff and see how they do. You might find that they open up some fun options within the game.

How do you feel about mixing firearms and fantasy? Is it straight sacrilege and you want to meet at high noon in the middle of the street, pardner? Or does it fit with the world settings you use? Do you find balance issues in them with the game systems you use?

Inspired by Ant-Man – Honey I Shrunk The PCs

I can be a better Game Master by…

Players build their characters’ classes, skills, and special powers based on what they want to do in the game
37 replies

Collaboration In Gaming At The MPCAACA Part 2

Thinking About The Characters’ Costumes
Scroll to top