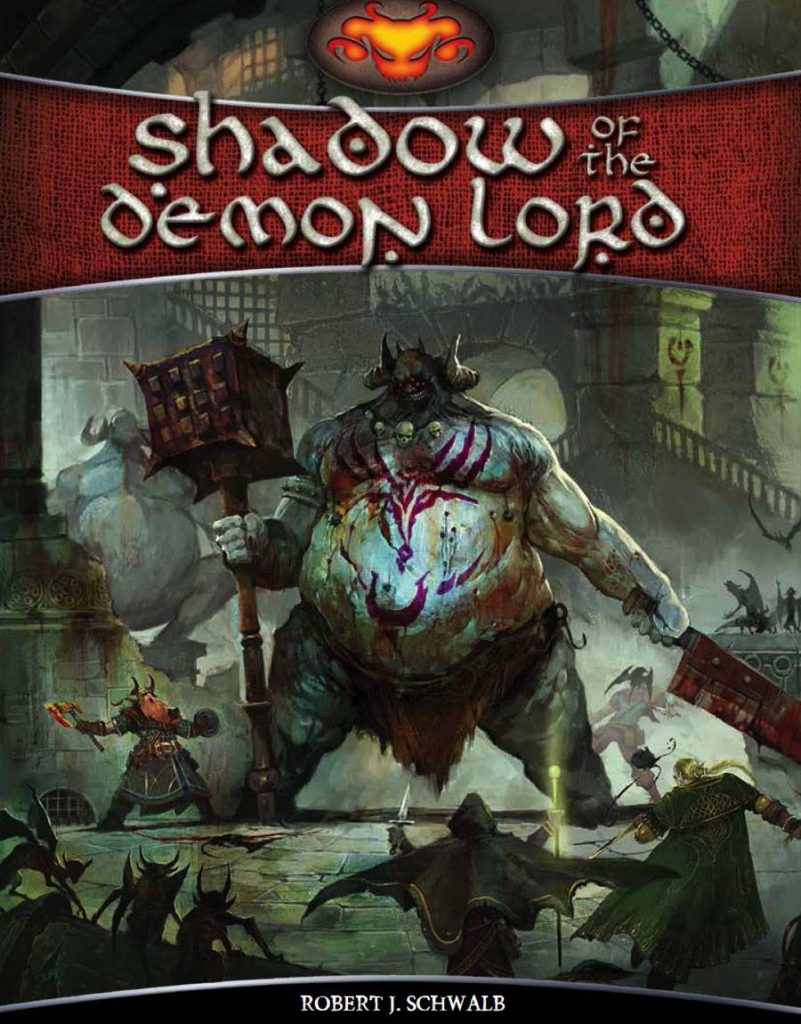 Back at Origins 2016, I got a chance to sit down and play a game of Shadow of The Demon Lord with game creator Robert J. Schwalb. I sat down to play with a few other people and after our total party kill I convinced the other players to gang up on Robert Schawlb and tag-team interview him. So, here is a mini-review of what Shadow of The Demon lord is and an interview with the creator.

Shadow of the Demon Lord sits right at the center of what I’d consider an old school fantasy game. The themes and concepts are not tame, and the books are full of beautiful art that other games might not take a risk on. The setting and themes convey a grim world where the world is in decline and where the twilight of the end of the world is on the horizon. This is not happy fantasy, but darker, grittier old school with massive consequences. Our party had a TPK and during every encounter the stakes were raised higher. That was somewhat refreshing, once you bought into the concept of the game. We weren’t playing out a story where we knew we would be victorious, none of us were the chosen ones, instead we were struggling to fight against the darkness for the last few years we had.

The setting of Shadow of the Demon lord is a world standing on the edge of the end of the world. The Demon Lord approaches, and where his shadow touches the world darkness and chaos reign. Soon his shadow will touch everything. The world feels like a typical fantasy world with many of the similar elements, only without a sanitized approach. The monsters and beasts are all a notch more horrifying than you would see reading Bullfinch’s mythology or Grimm’s fairy tales, even if the creatures are the same. The feeling definitely evokes dark sword and sorcery games, with evil magic and monstrous challenges abounding.

The system is a fairly quick and fast system, using a d20 roll for determining general success but banes and boons to determine modifiers. A bane or a boon is a d6 added or subtracted to your roll. Having 4 banes and 3 boons cancels out and leaves you with 1 bane. If you have multiple banes or boons, you take the highest rolled as a penalty or a bonus. Most challenges have to beat a 10 or a defense number in combat. That’s about it. There is an interesting turn system of Fast Turns and Slow Turns. Fast Turns go first but players only get one action. Slow Turns go after Fast Turns, but you can take more actions. There is a nifty Fast/Slow marker that is used in game and shows if it is Fast or Slow.

Magic in the system is fairly easy to understand, with spells having set descriptions and effects. Magic Casting characters have a number of uses of each spell per reset period and can trigger them as an action. Outside of that the system attempts to get out of the way as much as possible. The game aspect is one that is meant to be there when needed but distant when not required. 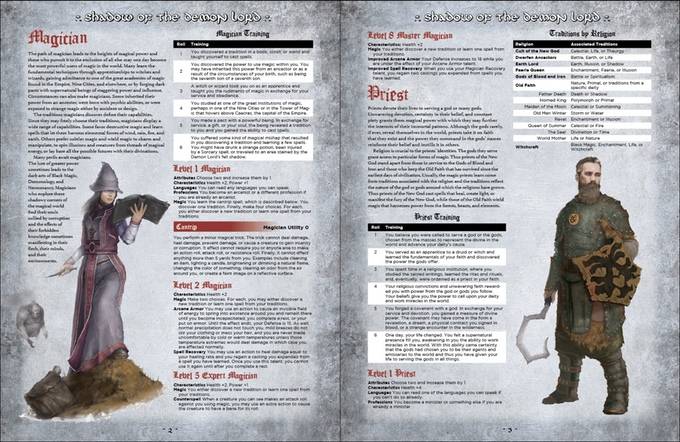 I quite enjoyed playing Shadow Of The Demon lord. Shadow of the Demon Lord is a beautiful mix of innovations that interpret old setting and mechanic concepts in a new way. While it doesn’t break any molds for new and off the wall game play mechanics or setting descriptions, it all comes together wonderfully to create something that will scratch an itch for gamers looking for an old school approach in a new way. The art and layout are beautiful, and while the concepts are mature and there is some shock value in them, they are thought out and fit within the overarching setting. Shadow of the Demon Lord promises old school game play that is fun, quick, and brutal, and it delivers excellently.

Paige Leitman: What is your philosophy of RPGs and how did that inform your choice of game mechanics?

Robert Schwalb: I’m a big believer in saying yes to the players. I’m very much about it, really. I want the GM to be an advocate for the players. Because we tell these stories together as a group, and when we look back on these experiences we share together it’s a cooperative thing where we’re thinking about, if I’m running a game and Dan’s playing and we had a really cool RP scene, we’re both involved in that. I’m not his enemy, I’m helping him tell a really cool story. That was what drove the design of Shadow of the Demon Lord, and even though the game itself is really difficult, the Game Master is there to make sure you get through it and have a really good time.

Paige Leitman: How did that drive the game mechanics?

Robert Schwalb: The GM has plenty of tools in the game to help players. The GM can hand out boons without fear of giving too much. Other mechanics like Fortune let the GM can give you a “cookie” for being involved and invested in the game. You spend the cookie to get a little narrative control for that instant.

John: You made a choice to make the game have more mature themes. What pushed that choice? What game play experience were you looking for?

Robert Schwalb: I think there’s an appetite for dark fantasy games in the RPG scene, largely because WFRP’s end left a big hole to fill. Dungeons and Dragons is kind of G or PG rated a lot of the time. I’m chasing an audience made up of adults who have a desire for adult themes to be explored in a storytelling environment. The RPG itself goes after that, I guess. Also I’m a big fan of Bloodborne and Diablo and those types of games. We don’t see a lot of that stuff translated onto the table, so I wanted to make sure we could emulate or create those experiences in a storytelling environment.

Steve Lewis: What were your biggest inspirations for the world themes? We each kind of envisioned different ideas for the world. For me it felt Lovecraftian, that dark ominous feeling.
Paige Leitman: Yeah, for me it was the movie event horizon.
John: Yeah, a lot like sword and sorcery stuff. 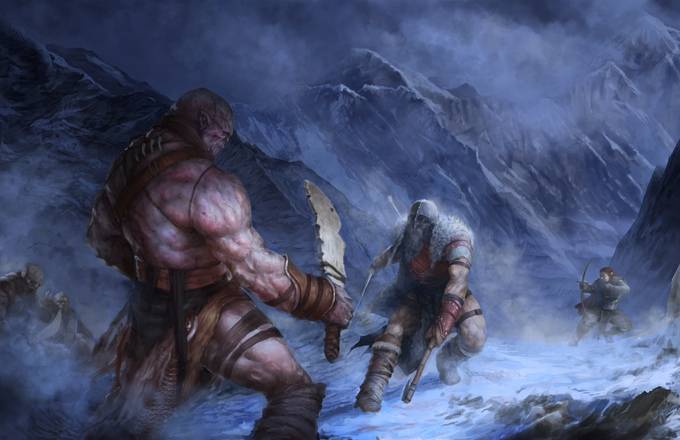 Robert Schwalb: You know, this is a little bit more complicated. I need to unpack this. When I got into D&D like a lot of the people who got into D&D, fantasy roleplaying has strong Tolkien themes. There were exceptions, but most fantasy involved dwarves and elves and halflings. Since that’s how I got in, I’m biased toward these world and if I’m going to color outside the lines, I’d invoke Elric or Black Company or Nehwon.

As I’ve been gaming for 30 some odd years, I’ve come to realize people who play RPGs come to these games with a whole host of assumptions about fantasy and so  I felt it was stupid for the game to say no to things like: “Can we have pistols?” “Can I play a robot?” “Can I play an orc?” In my opinion, the answer to these questions should be yes.

Now it did challenge me to overcome my own biases and present all those options that I think the audience wants.

This all said, you’ll still find Fritz Leiber, Michael Moorcock, Clark Ashton Smith, Lovecraft, and Arthur Machen in the world. You’ll also see Glenn Cook, Lynn Abbey, and Robert Asprin. And you’ll find stuff appropriate to Joe Abercrombe’s and Mark Lawrence’s books. I’m a voracious reader and I draw a lot of my inspiration from what’s out there and things that get me all hot and bothered.

I wanted to make sure all those elements are represented in the game world, which does have a hodgepodge higgledy-piggledy atmosphere. This was on purpose. The gamers should define the worlds in which their characters appear and twist it to match the stories they want to tell. If you want to get a game that has a highly developed sense of history, Forgotten Realms already exits, Greyhawk already exists. I love those worlds and games, but I’m selling you a game that you can play a campaign in 11 sessions. You don’t need to read hundreds of pages to get into it.

John: The mechanics have a get out of the way feeling to them. What’s the mechanic you are most proud of?

Robert Schwalb: If you look at a lot of sandboxy type RPGS there is always some kind of a meta-game you are playing. In 3rd edition you’re bonus hunting to mitigate the randomness of the d20 roll. In 5th edition D&D you are trying to find advantage in every situation to eliminate disadvantage or roll two d20s. Boons and banes do these things in Demon Lord, but they’re not additive to keep the numbers under control. If you have one boon and then get two more, that’s cool. You’re still going to max out a +6. This lets GMs reward clever game play and adjust the circumstances as they play out in the game without having to put in a rule for everything.

Paige Leitman: Why did you choose 1d20 instead of 2d10, so you’ve got a flat distribution vs. a bell-curve?

Robert Schwalb: That is a really good question. Basically, to keep the game moving, the rules state there are three possible outcomes for any possible action or described activity: yes, no, or maybe. When maybe happens, you determine what happens by rolling the die. Since the target number is pinned at 10, the even distribution of possible results on a d20 means you have a 55% chance of success before adding in modifiers or accounting for boons and banes. A bell curve approach would have been fine, but I would have needed to do something else with target numbers, making for a bit more complex game.