It’s August 8th, 2017 and Gen Con is about a week away. I’m going through all of my pre-Gen Con rituals – planning for the Gnome Stew dinner at St. Elmo’s and the ENnies immediately afterwards, getting the books and materials for the games I’m running compacted into better traveling boxes, setting up the tech equipment for the booths of the companies I help out, cursing the fact that I haven’t planned for any games to actually play in, etc. One of the rituals I undergo is figuring out how to get my social up and actually enjoy a big convention.

I don’t have social anxiety the way some people do, but I get some when I’m gearing up for a big convention and I get a lot of social fatigue just thinking about them. I love conventions. I love seeing my friends and feeling the rush and excitement of the throngs of excited people around me. I enjoy walking as a semi-invisible face in the crowd and getting to people watch. I love all of these things, by the second or third day if I’m lucky. For me, the time before Gen Con, or any other large convention, is when I’m working my brain around what it is like to be at a big convention and getting myself built up to handle the throngs and the rush of people. I like people, I really do. If you meet me at a convention, you’d never guess that I get anxious in situations like this. I’m loud and talkative. I have a big, goofy smile plastered across my face. I often have a flask of whiskey tucked away in a kilt pocket that I share with friends while at parties. I stay out way too late and meet a lot of people. This is one aspect of my personality at a convention, but it’s one that has largely grown as a defense mechanism out of the fertile soil of anxiety.

Don’t get me wrong, this is part of who I am. I’m not putting on a big show, not completely, but when my anxieties kick in during social situations,  I tend to move to the offensive rather than the defensive. I try to find a way to fit in and spend the energy building up inside of me and move it away from being self destructive. Like many self described nerds/geeks/outsiders, I’ve spent many years not knowing how to deal with social situations and being on the awkward, awkward fringes of many a conversation and social group. My teenage years were as awkward as the bowl cut hair that was still framing my head and my ability to hold a conversation was as blurty and nervous and fidgety as you can imagine, and this was in the time before being passionately excited about something nerdy wasn’t as acceptable as it is now.

[pullquoteright] I’m not telling you this so you know my story, I’m trying to mirror the story thousands of us have but can’t talk about.  [social_warfare] [/pullquoteright]At some point in my life, I decided to take that anxious energy about social situations and figure out how to channel it into something useful. I spent years of self reflection and gradual improvement, testing and learning new ways to interact with people. I used gaming as a way to test out different social voices and I watched what worked for other people and what failed and when I was feeling that nervous energy, I threw it into a new experiment in how to behave rather than let it pull me down. Some 20 years past my awkward teenage time, I can reliably pass for well adjusted and I actually feel confident in most social situations, but something like the tens of thousands of people at Gen Con and trying to juggle that with a busy schedule of meetings, games, and constant socializing can push me close to a null zero place on my social desire meter. Once I’ve gotten into the crowds and found my groove, I’m usually enjoying it a lot more and am more tired than just socially tired, but it takes a lot of brainspace and energy to push myself past my mental hurdles to not want to bail on Gen Con on the Tuesday beforehand.

I’m not telling you this so you know my story, I’m trying to mirror the story thousands of us have but can’t talk about.

Talking about anxiety is hard. It’s hard in geek culture especially. Most of us come from mental places where we haven’t always been socially accepted. It’s hard to make yourself that vulnerable when everything is normal in your life, but when you’re in a giant venue with tens of thousands of other people, fighting against a tight schedule to maximize your time, and you barely have an inch of personal space, it’s not hard to understand how a person’s anxieties can be overwhelming. [pullquoteleft] The one uniting factor of all of these anxieties, for all of these people, is that they are invisible.  [social_warfare] [/pullquoteleft]I know many people who can’t make it out to conventions due to their anxieties, some of them professionals in the industry who rely on the networking and connections that a convention can bring. I know many people who have pushed past or channeled their energy to make it to the con floor, but find themselves needing to constantly retreat away from the crowds. I know many people who channel their anxiety into only playing a certain set group of events that they know and can be sure of the rules (social and game) so they don’t have to spend brainspace on anything new. I know people who are anxious about being harassed, or ogled, or groped and won’t wear the cosplay they made to a convention this large. I know women who just don’t feel comfortable around conventions because people can be assholes sometimes. 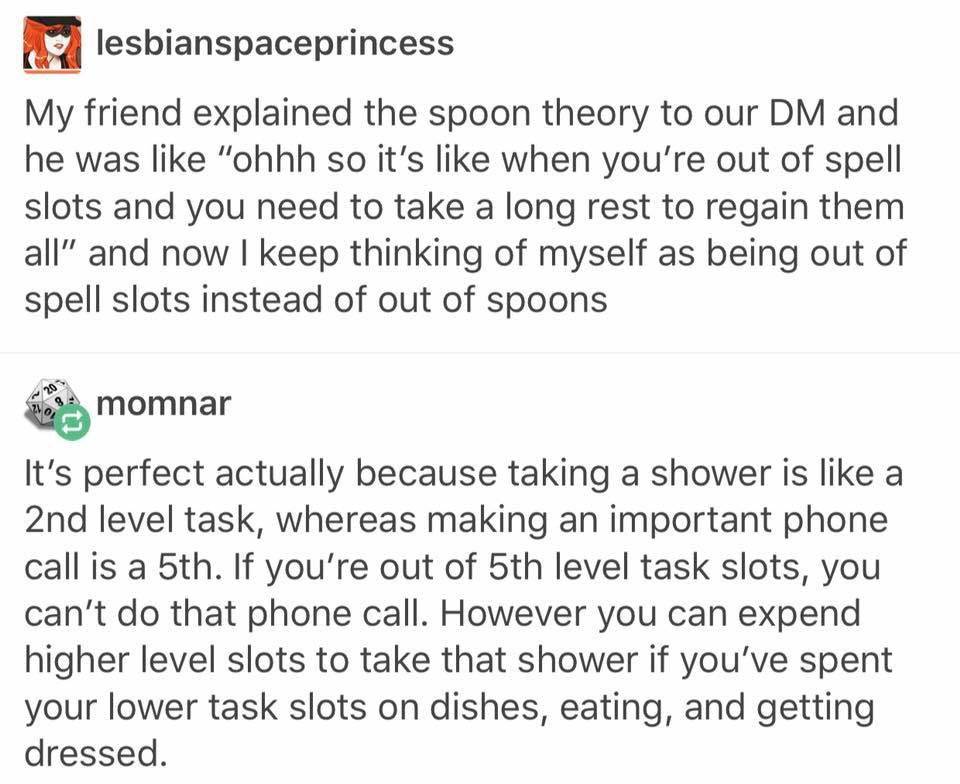 Look up Spoon Theory if you aren’t familiar with it.

The one uniting factor of all of these anxieties, for all of these people, is that they are invisible. No one will readily tell you about their anxiety, and in many cases they can’t. Talking about it is often a hit to social credibility, a token that you aren’t strong enough to handle your issues. No one wants to be seen that way, so often people can’t bring it up or signal that they are feeling anxious. This year, I’ve seen a lot of people online talking about the “rules” for interacting with them.

These are preemptive defense mechanisms to limit things that might drain them socially. While you might be a hugger, they may not be and ceding to your desire for physical contact may take a bit more of their spoons (or spell slots) than they feel free giving up. They may have problems saying it at the time, so they don’t. For some people, saying it on Twitter or Facebook as “rules” is an attempt to preemptively cut off some potentially anxiety inducing issues.

Help Others Out At Big Conventions

It’s nearly impossible to know what another person’s anxiety inducing elements are, and it’s also as difficult to know when they might be on the edge of their tolerance due to situations that have nothing to do with you. So, how do you help them out when they may not be able to tell you?

Overall, just be respectful, be aware of consent and don’t step on anyone’s boundaries, and watch people for signs that they may be having issues dealing with the crowds or social situations. Try to be a good friend, even to strangers, and make sure people have the room they might need to feel comfortable but can’t tell you about. Everyone has some anxieties that they can’t readily show, and those come out in bigger ways and large and crowded conventions like Gen Con.  Do what you can to help them, even if it just means being aware of your own personal boundaries and trying to respect those in others.

Expose Yourself To Many Game Mechanics