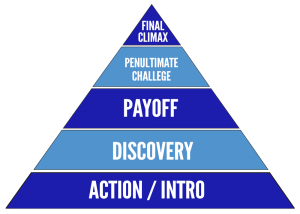 I was at Con On The Cob this weekend and I got the chance to play in a lot of adventures. I also got to hear friends tell stories, good and bad, about the games they played in. Those stories tended to focus on the extreme moments when they were good, and on how bad the entire game was when they were bad. One common thread I noticed about the bad games was that they weren’t structured to fit the convention format. In a home game, you can leave things hanging or stop at the good stopping point and move forward next time. With the four hours you’ve got the players at a con game, you need to make sure you keep things moving and interesting, focused on providing the players satisfaction for their time. I paid close attention to the rest of the games I played in and ran, and wrote up what I found to be the most satisfying format for creating one-shot convention adventures.

The first act or group of scenes in your con adventures should be aimed at two things. Introducing the main plot and starting things off with a bang. You should have some combat or action scene up front, maybe even started in media-res, so that the players get involved in something right up front. This combat scene is either just a spiced up start to the game, or it leads directly into the crux of the adventure. Ambushed by bandits on the road into town and it could be the lead in to the dark lord’s plot, or just a bit of a chance to connect with the other players through action. Why action first? Action in a game feels meaningful, and introducing an action scene up front makes everything that follows more meaningful.

Once you’ve started things off with a bang, drop your biggest, best clues to the adventure. If you’ve got a BBEG, drop their name somewhere here. If you’ve got a mystery that needs solving, provide the biggest clues up front. This leads into the second scene.

[pullquoteright] Structure your adventures with everything leading up to a successful ending, and it often turns out fun. [social_warfare] [/pullquoteright] With a bit of action already down and the lead ins to the big bad or mystery laid at their feet, the players will now want to pursue their clues and figure things out. This means your second scene should be all about discovery. Whatever directions the players want to investigate, let them walk down those paths and provide clues onto the next areas. This is the point in the game where players will be trying to find things out. This is the chronological point where they want to know what is going on and will be happy to devote their energy to the search. As the game moves on, they’ll want more and more payoff and less searching, so let them search while they enjoy it.

Just make sure to pay off their discovery. Whatever they have found in their discovery phase should now pay off here. Whether they followed a carefully laid path of clues or you threw in answers based on what paths they forged themselves, whatever they found has some payoff here. Probably another action scene, but the full picture is revealed or the outlines are at least well defined. Whatever the players discovered in scene two leads to some action or denoument here. If they found that the alien machines had markings of the third reich, time to go back in time and confront some nazis. Rinse and repeat act 2/act 3 as needed in mini-arcs to keep the players moving forward.

Discovery and Payoff have given your players a cycle of working towards a goal and achieving it, so it’s time to move onto the final acts. The Act 4 should be the penultimate challenge that prevents the players from immediately facing down the BBEG or ending the adventure. The chase to get to their ship, the death trap in the dungeon that they get caught in and must escape, or the monster that the BBEG calls to give him time to complete the ritual. This victory gives the players the desire to push forward one more time to that final, now more meaningful, victory.

This is it, the place everything else leads up to. This scene is where the players get to trounce the big evil, destroy the black hole, or stop the bomb countdown. Like act 2 discovery/act 3 payoff, this is the payoff to the clues you dropped in act 1 and the payoff to the entire adventure. Act 4 is meant to delay this scene so that it feels more dramatic when you get to it. Acts 2/3 are meant to fill in the blanks to get to this point. In other words, in a convention game everything leads up to making this moment mean something. The importance of the other scenes is not contained in that scene, but in how they are the foundations of these scenes.

Don’t forget to pay off the players in a meaningful way. The Denoument phase is super short and gives the characters any rewards they were promised, but pays off character goals for the players. Whatever the players emphasized about the characters should be paid off here if it wasn’t something relevant to the final climactic scene. If the barbarian warrior got the final blow on the BBEG, that might be payoff enough, but if they did it for glory and honor this is the time the town feasts in the heroes name. Watch for things the players would feel rewarded by, and include them here.

Convention adventures are by and large simpler, tighter, and harder to pull off successfully. Approaching them with the same tools we approach regular campaigns with is often a recipe for disaster. Structure your adventures with everything leading up to a successful ending, and it often turns out fun. What format do you use for convention adventures? What is your best convention game story? Your worst?

Inspired by Ant-Man – Honey I Shrunk The PCs

Gnome Stew Invades Con On The Cob!!! and a Little Advice For Surviving Convention Games

Hot Button – How Much Information Do You Need In Published Scenarios?

Modelling Sickness In A Tabletop RPG

A Simple Primer On Converting Between Systems

My that’s a dashing 3D modeled Kilt you have…

Stat Yourself As A Character To Combat Anxiety
Scroll to top