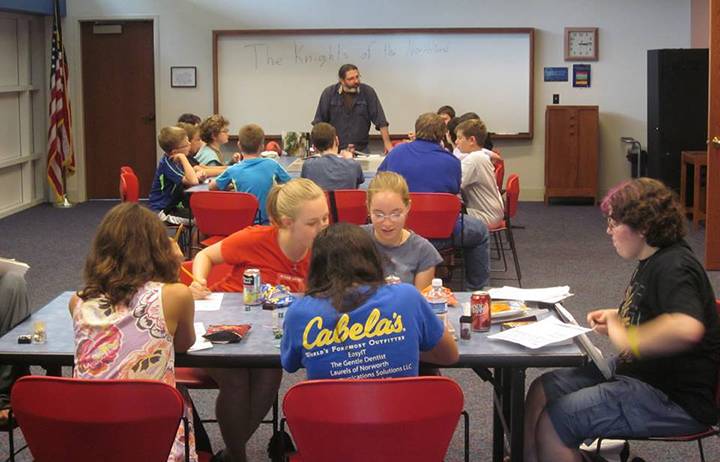 A few months back I wrote a review of Dragons in the Stacks, a book by Steven Torres-Roman and Cason E. Snow about running teen gaming programs in libraries. I’ve long been a fan of libraries as spaces for the community, and having worked in libraries I set about searching for a teen gaming program at my local library or starting one. Unfortunately, there are restrictions on what kind of teen programs can run in the Columbus Metropolitan library district, and gaming doesn’t fit under their homework/school related/vocational policy.

The story doesn’t end there, thankfully. Enter the Worthington libraries and their already existing teen gaming program – Knights of the Northwest. Started by Ann Pechacek, the Librarian in charge of the program and Jason Paul McCartan (of infinibadger press), who volunteered to help make the program happen, the program is currently running with many teens showing up every session for multiple games. I contacted them and got involved with running their constantly growing program. I learned a couple of interesting things running for teens in the program.

I already knew that a program like this would be well received by the teen community it was looking to serve. The numbers at the program continue growing, and when a GM doesn’t show up, tables can grow to 12 to 15 people. There are multiple tables going at any one time, and at some points the atmosphere resembles a mini-convention more than a teen gaming program. There are multiple different types of games running, but many of the games tend to skew towards D&D 5e. The groups are diverse as well. I was quite pleased to see about a 2 out of 5 ratio of female gamers to male gamers of varying ages, as well as female Game Masters at many of the tables.

Gaming While A Teen Is Exactly As You Remember It

Many of my generation of gamer has a long ago, but fond, memory of gaming as a teenager. The unbridled joy of youth mixed with hours pouring over a gaming book dreaming of the awesome things you were going to do in the game, only to dissolve into a sugar-fueled, murder-hobo destruction of everything in the game world. That’s still going on. Enthusiasm among teen gamers is as high as nuance and intrigue are low – but it’s enjoyable in its own way.

Player 1: “Yaay we saved the old lady being attacked by bandits!”
Player 2: “Can I use the spine of the guy I killed as a whip!”
Player 3: “I stab the old lady!”
Player 2: “We just came to save her! You’re a monster!”
Player 3: “Well now I’m mugging her! And you’re using a spine for a whip!”
Me: “GUYS! Relax for a second. We’re playing The One Ring, and this is not the behavior of noble men of Gondor.”
Player 1: “Is Bilbo Baggins around? I want to get drunk with him!”
Me: “Ok, you can use the spine as a whip if you make a survival roll, but you take 2 points of shadow. You get drunk with Bilbo, no he isn’t wearing the ring and you can’t pickpocket it. You get dragged off by the town guard for trying to kill the old woman. The mission now is to break you out, but in the meantime a Balrog attacks. Roll for initiative.”

Definitely not the nuanced sort of gameplay I have with my older gamers, but not all that different… actually. The joy and enthusiasm for interacting with the world, the attempts at circumventing the plot in favor of their own plans, the inevitable landing of one of the PCs in jail. Everything is about the same, just with a little less polish and patience.

To curtail some of the exuberance of the players, my second game with them was a space horror game of Dread, using the Jenga tower mechanic to instill fear into their hearts the more excited they got. There were still plenty of jokes and energy, but the kids were amazed at having a mechanic like the Jenga tower and respected the tumultuous nature of it. Their approach was completely different and they were still telling stories from that game many sessions later.

I remember being a young nerd without a gaming group. My catholic school didn’t have one and there was nothing like it around me at the time. I wish there was though, because this is a great space for shy introverted nerds to get to interact with other people who share the same hobby.  During one game I ran, a very shy and nervous kid was brought in by his parents. We made space for him and handed him a pregen. At the start of the game, he didn’t have a lot to say and wasn’t quite sure how to get into the game — this was his first ever gaming experience. It wasn’t long before the excitement and energy caught on and he and the other kids were working to outdo each other in terms of being more awesome or making a funnier joke. By the mid-point, he seemed like a totally different person. After everything ended, I watched his parents talk with the other parents, trading phone numbers and contact info. From what I could tell he walked away with 3 or 4 new friends who went to his, and different, schools. That is incredible and shows the great utility of this kind of program.

My Group Has No Idea What Is In Store For It 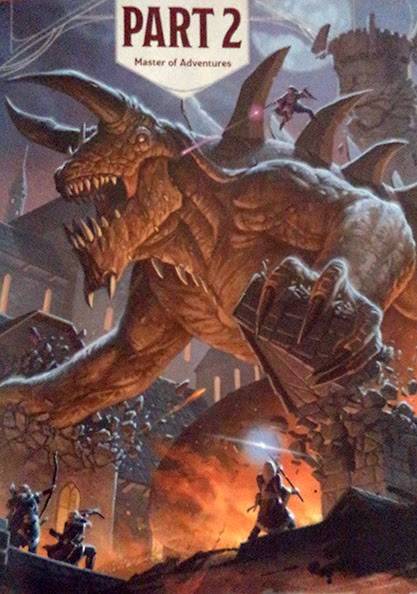 IMG From 5E DMG by Wizards of the Coast.

The group of teens that have gravitated towards my table have been begging for me to run a D&D 5e game. The were fairly amazed by their experiences with Dread and The One Ring. I’ve been introducing them to different types of games, working up to a fate game of Camelot Trigger, but I’m going to give in and run the D&D game they are wanting, kind of… The kids are used to a fairly standard D&D fare, run by younger GMs and hewing pretty close to the rules. To their young minds, the rules are steadfast and iron, with no room for bending or handwaving in favor of fun. I’m hoping to give them a different, less rigid experience of the sort they haven’t really experienced yet, but also within the guidelines they are familiar with. If the reaction to past games I’ve run is any indication, the 5e experience they’ll get from the next game I run is going to blow their minds. Enter the Tarrasque.

They’ve played a lot of low level games so far, so I’m starting them at 6th level, in magical chains, in a different dimension that is a kind of dumping ground for anything lost in the planes. Anything, from any D&D world could exist here. In order to escape, they’ll break the artifact keeping them there and, uh oh, release the Tarrasque that was also being held by the device. The only way back to their home worlds will be disabling the device on the Tarrasque, or killing it, but they are far too low a level to do that. They’ll play a few sessions researching, gathering xp and items, and then we’ll fast forwards a few months to a higher level and have them shortform tell the stories that happened during the time-jump. Wash, rinse, repeat and their long-form montage will get them to Tarrasque killing levels — then they’ll get to tackle the big boss fight and we’ll see how it goes. Like most plans put before players, especially teen players, this one will probably fall apart in some glorious way. Even if we don’t get to the end game, it just might be the sort of game that makes the players think about broader play styles and breaking the rules in favor of fun.

I’m looking forward to doing more gaming like this at the library, and I’m incredibly glad that I found a program I could participate in. It’s rewarding and library gaming programs, especially for teens, have a ton of benefit for the teens that play in them. They provide a monitored space where kids can feel safe and expand their gaming horizons while making new friends and learning new skills. I hope more libraries start up gaming programs and see the benefits for themselves, and I’d invite you, the reader, to contact your library about helping out or starting one yourself.

Were you part of a gaming club or group at your school or library? What was your favorite gaming moment in your younger years? Do you participate in meetups or gaming programs like this, helping foster a new generation of gamers?

RESISTOR – A Zine Full of Games

Back To The Future For GM’s Day
Scroll to top