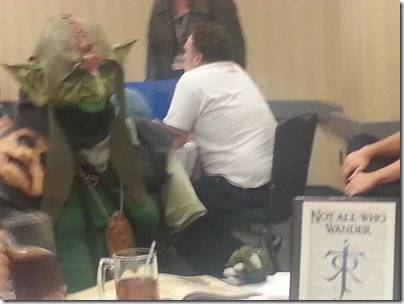 The name of the dashing green fellow in the picture to the right is South. He and a bunch of his friends showed up at a game of The One Ring that I ran at Origins this year. South showed up just like this, in full Orc makeup from a larp he was involved with earlier. Joking around, he played up his Orcish character and joked around with the other players both known and unknown to him. As I went around the table and gauged my audience, I asked two questions.

How familiar are you with The One Ring and what games do you usually play?

Ok, cool. What did everyone come here for? Do you like Tolkien? Do you read the books, watch the movies?

I pulled South over and asked him how well he knew the system and if he wanted to make this a PVP game. I’d run the narrative and he would play out the BBEG and a few key underlings, running the combat with prompts from me. I’d cover his game cost and he would get to keep acting in character. He jumped at the chance and we ran the game together. The other players bought in and were looking forward to taking on their friend in the game but not seeing him as the Game Master.

For my part, I modified the story greatly and on the fly. I added a monster character based on what South said he would like to play and he on the fly fleshed out the Mountain Troll Tuskmaw, asleep for hundreds of years and just now awakened to terrorize the Riders of Rohan. He  controlled Tuskmaw in the introductory flashback that the players retold/played in to get used to  the system. 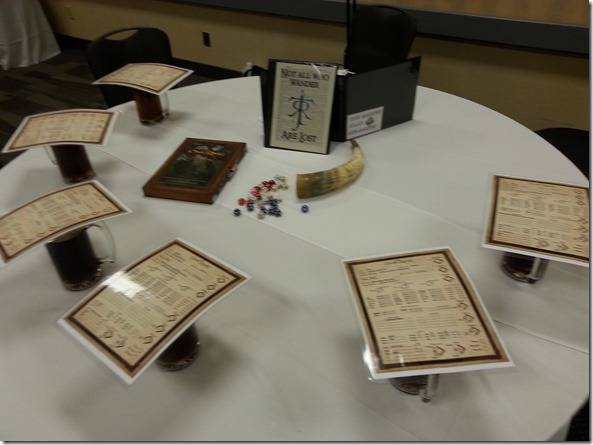 The game started at a feasting house, drinking and recounting the tale that brought them to the Thengel’s table.

Then, he played the lieutenant’s of Tuskmaw, goblins on Wargs, the leader of the savage tribe Wulf, one of the PCs, had to wrestle to gain favor from and make a peace deal with, and finally came back to playing Tuskmaw for the final, epic battle.

I ran the narratives and prompted him on what to prepare and expect. He pawed through the monster stats and used his focused attention to use the monsters to their utmost ability, making sure the Fear effects and points were used appropriately and readily. These were things I would have forgotten about while trying to navigate all the other enemies and move the story into the next arc.

The other players rose to the challenge, doing epic things in combat and the narrative elements. They seemed to rise to the challenge and want to be as awesome and epic as South was playing up his characters. I got to maintain my neutral position as the Game Master and story moderator, handling the other situations and letting the players focus on their enemy who was suddenly alive and in green – Tuskmaw.

The game ended with the climactic killing of Tuskmaw by Wulf the barbarian, wielding a spear whose blade was stained with the blood of a creature of darkness. The group let out a huge sigh, everyone had a great time and South gave a meaningful death speech in character.

This experience reinforced a few key ideas that I have about GMing. If I hadn’t been open to these concepts, the game would have been good, but not the epic masterpiece it became. 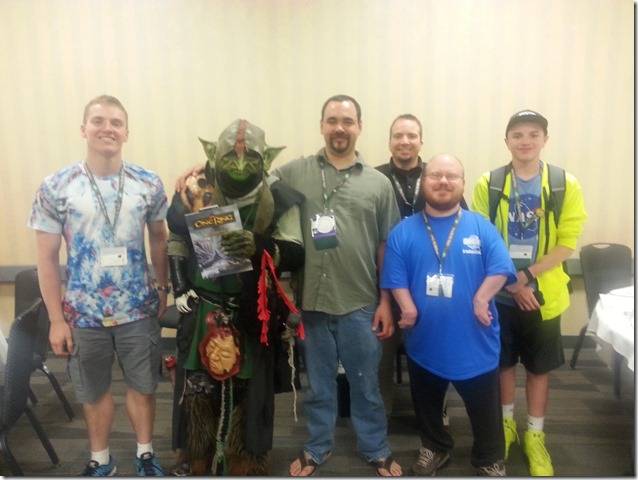 Have you ever had a “Gift Orc” show up to a game? What form did it take? How did you incorporate it? What tells do you have that are “Gift Orcs” when you are a player?

A Simple Trick To Keep The Spotlight Moving

Breaking Canon For A Better Experience

The 3-3-3 Approach To Quick Game Prep

Running A Game Is Like Being A Cat Owner

Hands On With Hero Forge

Gnomes At Gencon and You Pick It, We Review It 2015
Scroll to top