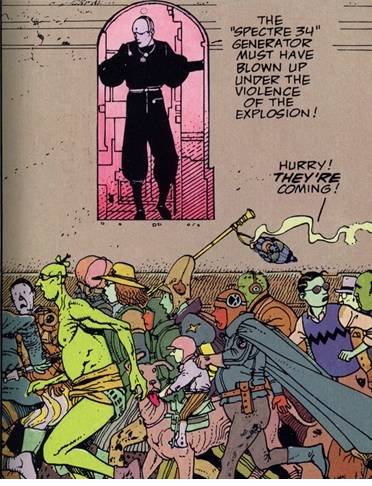 Recently, I’ve been reading through the collected works of french comic artist Jean “Moebius” Giraud. Moebius’s works are sci-fi/fantasy epics that are fast paced, with the story holding a consistent but somewhat disjointed thread throughout the piece. I’m on page 127 of the 300 some page work L’Incal, and new things are constantly happening and resolving without much exposition or leadup. New characters are being introduced with little backstory or apology to the reader, but as the story continues along it all merges together to make a cohesive whole.

Comics by Moebius are often action packed epics that range throughout vast lands or across worlds and keep the action and story moving along, even if it doesn’t make complete sense or seems a little Deus Ex Machina at times. Sound to you like a typical roleplaying game? There is a lot that can be learned from Jean Giraud’s story pacing styles, especially as people have less and less time for gaming in their lives.

There are a few key areas that make Moebius stories work. There are often analogues to structures we use in tabletop roleplaying.

Moebius’s stories often start with a seed of an idea and develop more as they go along. Sometimes they are heavy handed and lack a subtlety seen in other works, but they are always interesting, unique, and keep me glued to the page to see what happens next – despite their flaws as a coherent well thought out plot. Roleplaying games are like this. We can’t control what happens and a good gaming experience wouldn’t necessarily make a good novel or movie. The importance and fun of the experience is in something else, something only loosely held together by the story.

[pullquoteleft] From a player’s perspective, it means more time spent doing and less time spent siting around waiting to do.  [social_warfare] [/pullquoteleft]The story bends to the demands of that other experience. In the case of many of Moebius’s works, it is because the art is fantastic and the action keeps coming. What starts as a ride through a forest on a strange mount by a hero flips to a few micro-sized people piloting a giant humanoid robot through a ruin trying to fit into an alien society and ends with a bi-plane bombing a town. It doesn’t all fit together except by very loose threads, but you want to know what happens next.

In the case of roleplaying games, the story bends to the demands of the game and the players. If Joe’s character isn’t getting enough spotlight and you sense yourself losing his investment, you switch the story to him even if it would make more sense to keep the current thread with Jeanie and Rick going. If you’ve got a player with an incredible power to grow large in your game, you find a reason for him to battle against other giant sized opponents, even if they wouldn’t fit the logic of the world in any more than passing fashion. The story gets validated in the player’s minds because they get to be a part of it and it is a fun experience.

Using It In Your Game

Roleplaying games and Moebius’s stories already have many common elements, but there are a few ways we can take the story pacing set up by Moebius and apply them to our games to advantageous effect.

Often Moebius uses the narrator’s voice to quickly move into the action without having to do a lot of setup. You can emulate this by asking your players “What next?”, getting their actions, and then narrating them to the next important roll they will make.

The action still occurs, but instead of spending a lot of time on each player’s rolls and failures, you emphasize the ones that move the action forward, emphasizing the narrator voice as you outline the action and move to the next important bit. 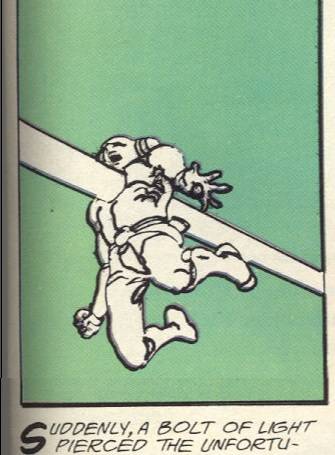 From a narrative aspect, much of the action in a comic book is the result of a success or a failure and not the attempt at it. Rarely is the hero winding up to take a punch and then swinging, but instead you see just the connect and the damage. Misses aren’t even shown unless they have narrative impact. We can simulate this by doubling up on rolls wherever possible. For things like attack rolls, roll damage at the same time so that you can quickly move from success to damage and let the player narrate the attack in one fell swoop of action.

The key to this technique is to have multiple actions combined (when it makes sense) as often as possible. It keeps the narrative flow a single straight line without small pauses so the player can say what they were going to do if they succeeded. Added bonus, it means time in the spotlight is emphasized as players will feel the focus more keenly even if the actual time isn’t extended.

3 – NPCs Just Are, but they bloom from whatever moment they are planted

The strange blue man you meet isn’t described, brought up, or focused on until he is important. When he is important, players have whatever knowledge they need to move the situation along. If the PCs are searching for a fence who might have heard about a recent robbery and the person trying to acquire the stolen item, the players are likely to make rolls to get that information. (Dragging in #2, Combine rolls, ask them to make their intimidate or diplomacy roll at the same time as their roll to find the fence.) That’s the moment that the NPC with the information pops into existence. You can let the PC who used their knowledge of the criminal syndicate know who the fence is and what he is susceptible to, justifying their roll to intimidate or coerce. Once that NPC is involved, they’ve got the spark and are suddenly someone in the story, not just a background element. Before the PC made the roll, nothing mattered about the strange blue man in the background. Now, however, the PC knew all about him and was probably searching him out, and he probably has the knowledge that is actually needed. As you move along, he becomes important and gets a name – Carnelian. He becomes a piece of the story and is probably the go to person for information about the underworld. 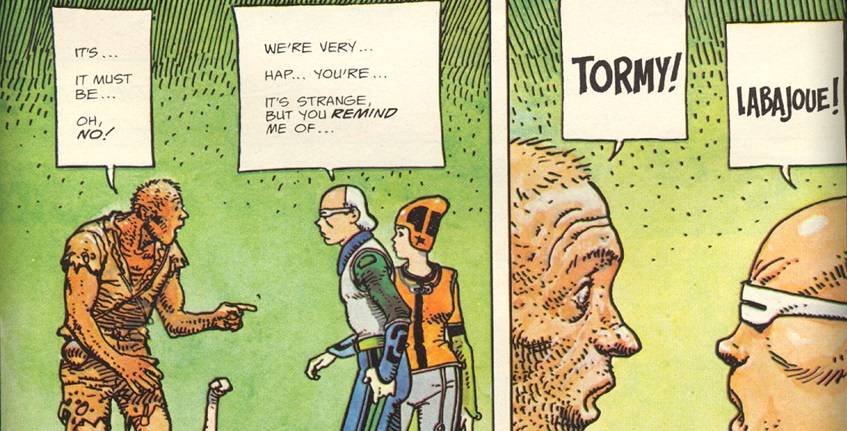 As I mentioned, Moebius’s style of storytelling has some flaws from a narrative perspective and it isn’t for everyone. For a quick paced and action oriented game, it moves things along and keeps the focus on what is important to that game. From a player’s perspective, it means more time spent doing and less time spent siting around waiting to do. Interestingly enough, it also strikes a parallel with older style games. That might lead one to think it emphasizes railroading, but if you are careful about considering the pacing and action and ensuring player options, focusing on the bits of your game that move the narrative forward will really keep the excitement high. It might require a bit more suspension of disbelief, but it will garner more player engagement. That makes this style of pacing perfect for a convention game or a game where you know you have limited time.

What do you think of this frenetic style of pacing? Are you already using elements of it in your own way? What bits of the game do you consider not important enough to push past?

There Is No Do, Only Try