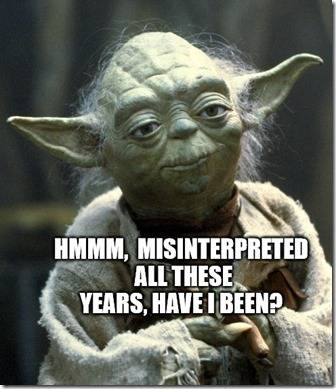 We’re all probably familiar with the famous Empire Strikes Back line delivered with incredible gravitas from the wizened old green muppet Yoda: “Do or do not, there is no try”.

While the meaning is fairly clear – you have to tackle challenges with the attitude that you will succeed – I’ve been thinking about how often that idea can be misinterpreted and put a lot of pressure on people. I’ve been thinking about this in a gaming related way thanks to playing in a few… well, not quite stellar games. The GMs were trying their hardest, but elements of the games or a misread of the group at the table just made them fall apart.

It’s hard to run a great game, and that always seems to be the brass ring that we as Game Masters strive for. We want our next game to be 10 times better than our last one, and we work towards that. But a bad game can feel like a huge let-down and really demoralize us. In one of the games I was in, the table was not read, we took two hours of play time to make characters instead of what we thought we were signing up for, and we didn’t have any real tie in to the story after that. I think only 2 of the 5 or 6 players came back for the remaining parts of the Game Master’s 3 part planned epic.

As I sat at a table across from the second session of that epic game and listened to it go on, slowly deflating until a break was called, I couldn’t help feeling bad for that GM. I’ve been there, and I feel that we’ve all probably been there. The game I was currently eavesdropping from, and not paying attention to, was decent but not as interesting. [pullquoteleft] In so many cases, we fail to do – and it’s okay. Sometimes all we can do is try and hope for the best.  [social_warfare] [/pullquoteleft] A playtest of a person’s new system, it relied on heavy knowledge of the Game Master’s homebrewed space setting and suffered from many breaks so that we could be told what the importance of a particular element was or that certain options and physics manipulations were available to us because that was a common thing within the world. It would make for an interesting book, but the game failed to grab most of the players.

Thinking on these games, I couldn’t help but remember many moments that I as a Game Master have failed at achieving what I set out to do. I set my sites too high, I envisioned different reactions, or I watched as a carefully crafted intricate world got overrun by the murder-hobo’s that the PCs decided to be.

In so many cases, we fail to do – and it’s okay. Sometimes all we can do is try and hope for the best. Setting out to run a great game and failing isn’t bad. The two games I played in weren’t the best, but those Game Masters did so much more than people who didn’t even show up at the table with their epic ideas. Just coming to the table and trying to make a fun experience for the group is an incredible feat in and of itself and every Game Master who does so should be applauded, whether successful or not. Go out there and try, and don’t worry too much about being incredible if it puts pressure on you. Always try to do your best, even if you don’t feel like you’re going to make it. Always be willing to ditch the epic epic results in your head for the more epic actions going on at the table. Never be afraid to step up and give it a shot. There is no do without the try.

What was your worst GMing failure? What was your most epic idea gone wrong? What was the most fun game moment you had come out of something failing to be taken as intended?

Pacing, Ala Moebius
Scroll to top